The bits and pieces are lying about all over the place, speechless and totally useless, rebuking me by their presence, and my guilty conscience is growing larger and more troublesome every time I see them. I’ve tried saying sorry but they just maintain a tinny silence.

But what can I do? I didn’t mean to kill any of them. They were killed by accident.

The first to go was 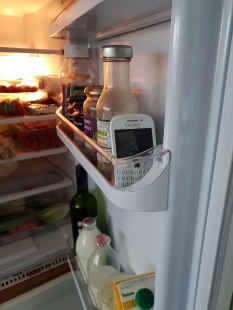 my mobile. Poor thing. I got up one morning and reached to switch it on and it wasn’t there. Much grumbling and trying to think where on earth I could have put it. Under the pillow? No. Under the bed? No. In the wardrobe? In the bathroom? In my handbag? In the kitchen? Among the cushions on my three sofas? But never a sign of it. I tried ringing the thing but there wasn’t so much as a squeak in answer. In the end I got thoroughly fed up and decided I’d have a cup of tea and start breakfast and I opened the fridge to get out the milk and there it was, lurking and silent. I couldn’t for the life of me think how it had got there, but a night in the cold had killed it. It wouldn’t ring and it wouldn’t work.

So I had to buy another one.

A few weeks later the

killer instinct had me in its clutches again. I find it difficult to sleep so my regular bed mate is my iPad on which I read one novel after another, whenever I need to. That morning I was in a rush and I wanted to get my washing done first and had left it all in a heap in the middle of my bed. After breakfast I went upstairs and scooped it all up and took it down and put it in the washing machine, feeling I’d made a good start to the day. Wrong! When the washing was finished, I opened the door of the machine. And the first thing that fell out was my iPad! Dead, dead, drowned and never call me mother.

So I had to buy another.

The third casualty was a pair of bathroom scales I’d been using for about thirty years and this time I wasn’t the murderer! When I came home from my second stin

t in hospital after my heart attack I was put on statins although I did tell the doctor that I found them very hard to tolerate I was consequently, decidedly ill with constant diarrhea, nausea at mealtimes and considerable difficulty in swallowing. I consequently lost rather a lot of weight, so much so in fact that I became alarmed and weighed my self every other day,which looking back on it, was rather excessive. It annoyed my older daughter very much and she took out her annoyance on my poor weighing machine which she confiscated and took away. Some months later I dared to ask her if I could have it back and she laughed at that and said she had hidden it in the house and it had been under my nose all the time. I passed that message on to my Charlotte who found it almost at once, it was in the airing cupboard, hidden behind a door I rarely opened. It had blushed bright orange and was dead, dead, dead.

So yes you’ve guessed. I had to buy another! And now I have three reproachful corpses, one frozen, one drowned and one baked alive.