This is a birthday card but one with a difference.

eting and now I can’t resist spreading it around a bit more. It was such a bold, clarion call, such a clear, intelligent statement of belief. ‘We hold these truths to be self evident that all men are created equal, that they are endowed by their Creator with certain unalienable Rights, that among these are Life, Liberty and the Pursuit of Happiness.’   They look such wonderfully, serious, sober men but they were switching on a light that would give hope to ordinary people all round the world from then on. 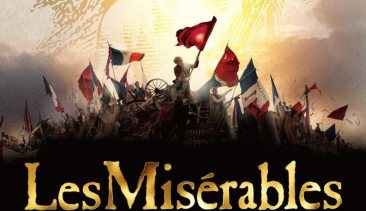 evolution of the subjugated working classes had begun and was spreading. Until these two events the wealthy elite had grabbed all the goodies and all the money and exploited the poor unchecked, now they were facing a powerful and determined opposition. ‘Bliss was it in that dawn to be alive’, as Wordsworth said ‘but to be young was very heaven.’

I felt much the same in the summer of ’45 when the war was over and the British plebs who had fought and suffered in it staged their own bloodless revolution in the first general election for 10 years. We were so sure of our strength in those heady days. We knew what we were going to do and that our new government would do it, founding the NHS and the welfare state, building schools and houses not for the obscenely rich but for ordinary people, putting into action our deep felt belief that all men are created equal.

Now, sad and hideous though it is to say it, our compassionate society is being destroyed. There are clear signs of it everywhere we look. Demoralised railwaymen out on strike because they know the new trains cannot be run safely without guards. Teachers in schools unable to teach because of the pressure of so many totally unnecessary and damaging examinations, their pupils worried sick. Our superb junior doctors bullied to accept a settlement they know won’t work, out on the streets in protest. Libraries closing, shops and businesses going bust. Our newspapers and television companies ruled by obscenely rich billionaires. And most insidious of all, because it’s all been done in secret, 99,344 properties in this country owned by overseas firms run by – yes you guessed it – foreign multi-millionaires. The old class war of the rich against the plebs, is being waged brutally and ruthlessly.

So it’s a very mixed message I’m sending you on your birthday Mr Corbyn. Strength to your honesty. Our next jour de gloire will arrive.

so they say, than to arrive. Ummm. I’m not so sure of that.

Last Thursday I went to a party at the Royal Overseas League in St James’ Street in London. It was a great mistake, not because it was a terrible party, quite the reverse. It was a splendid event where the wine flowed freely and I met lots of old friends like Eileen Ramsay, seen here

handing out an award and Jenny Haddon seen deep in earnest conversation and our Jan Jones, the master organiser laughing in her lovely way. Oh no, there was nothing to fault in the party, the faults were in the nightmare journeys there and back.

I haven’t travelled on the railway for some weeks because I haven’t been able to see well enough so I wasn’t prepared for the chaos that followed me for two long and as it turned out, difficult journeys.

The first one from Bognor to East Croydon started well enough but then we got stuck at Horsham where a second part of the train was supposed to arrive and be attached to our part. It was 25 minutes late. Copious apologies from our poor guard, who couldn’t tell us what had happened but was sorry it had. It seemed a very long wait and meant I missed my connection at East Croydon. Never mind. I was going to stay with my sister and 25 minutes is very little compared to two days. I wasn’t quite so sanguine on my return journey.

Southern Rail was in complete malfunction mode, the first train I tried to catch was cancelled at the last minute because of staff shortages according to the announcement board. The next train wasn’t due  for another half an hour and that ran l 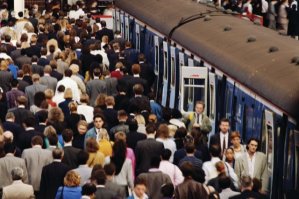 ate. Surprise, surprise. But when I got to East Croydon it wasn’t just delays and cancellations, it was trains that didn’t seem to be running at all. I waited for over an hour for a train that the notice board there assured me would be going to Bognor Regis and which was then cancelled. Hey-ho, when’s the next one. At this point my luck ran out altogether. There 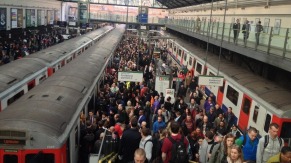 wasn’t a next one according to the station staff and the best they could advise was to take the next train to Brighton and come back along the coast from there to Barnham. Double hey-ho. By that time, all the platforms were crowded and there were people running from one platform to another in as much confusion as I was. Cancellations were continually being announced with more apologies. But the Brighton train did turn up and although it was crowded I actually found a seat. I knew it would be two hours before I got home but at least I was heading in the right direction and this train was an express.

Correction! It should have been an express but it was slowed down by a train on the line in front of it. More apologies. By then it was getting so late that many of the people who’d boarded the train to travel to places like Worthing, Chichester and Barnham were beginning to fear that the last train out of Brighton that night would be gone before we got there. We were rescued by the guard. What invaluable people guards are and what would we do without them?  This one phoned to Brighton and persuaded someone there to hold back the Coastline train until we arrived, which to our great relief they did. It was a squash to get on and there were people standing uncomfortably everywhere. But we all told one another that even though the train was stopping at every station, we would eventually get home.

Ho-ho. Barnham had a nasty surprise for us. The last train to Bognor was gone and as far as we could see, we were stranded there. Step forward our hero the guard who somehow or another, God knows how, persuaded someone at the station to call a coach which after a long, cold wait finally arrived and deposited us all on Bognor station where my car was waiting for me. It had taken me over four hours from door to door. 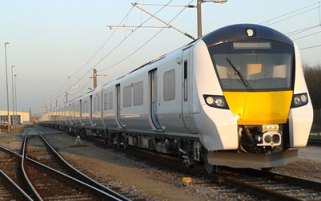 Last night to my horror I watched the news on television about the new enlarged Thameslink train that had just been unveiled and would soon be going into service. Without guards. Dear God, what are they thinking of?

This train which looks very grand and cost millions has fewer seats than are normal but the spokesman told us not to worry about that because there would be plenty of room for people to stand. We should be so lucky. And it is all in the single charge of a driver, without a guard to help him. What will happen when one of the passengers is taken ill or is sick or is drunk or violently aggressive. Oh what fun this new world is going to be. I think I shall start saving up for my personal helicopter.

It really is Spring now and the cherry trees are proving it. And it’s possible to write about something delicate and beautiful and tender and to turn our eyes away from all the appalling things that are happening in our world. I don’t think any of us will ignore them – how could we? – but it’s comforting to look at things in bloom as A.E. Houseman knew very well all those years ago.

Loveliest of trees, the cherry now
Is hung with bloom along the bough,
And stands about the woodland ride
Wearing white for Eastertide.

Now, of my threescore years and ten,
Twenty will not come again,
And take from seventy springs a score,
It only leaves me fifty more.

And since to look at things in bloom
Fifty springs are little room,
About the woodlands I will go
To see the cherry hung with snow. 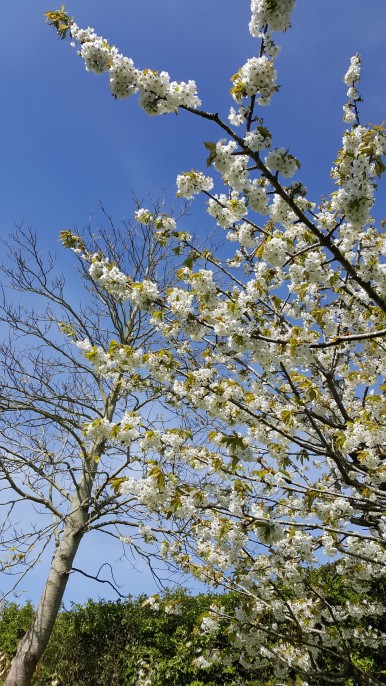 Such a gorgeous tree and even when November comes and it’s shedding it’s leaves, it’s beautiful and stunning and it lifts our spirits just to look at it.

Shouts her challenge, loud and heady,
Down with death, with woes, with fears,
Till she stands bereft and slender
In a pool of golden tears.

She, who in the frost of Easter,
Wore a cap of fragile lace,
Soft and white and soon to tatter,
Absolutely out of place.

Singing to us in the garden,
Death is conquered. Do not fear.
Young and feminine and tender,
Love’s reminder every year.