This is an anniversary I’ve got to celebrate on my own. 70 years ago today at half past ten in the morning, in Wandsworth Registry Office, Roy and I got married. It was probably the most miserable day of our entire life together. This photograph was taken about an hour after the event and my darling’s body cues and expression tell the story. Hands on hips and feet slightly apart it says ‘sod yer!’, the expression on his face says ‘I’ve married her and there’s nothing you can do about it!’ He was a good bloke.

After that the only way our marriage could go was up. And for the next 54 years that’s the direction we took. I hope the next photographs will show how happy we were -especially when our first baby arrived. We didn’t have very much money but we had one another and we had our babies. 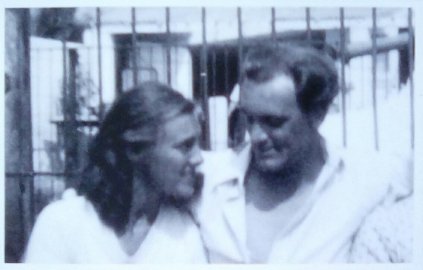 Which is not to say, we didn’t make mistakes. I wince to remember an absolute howler. He was an ardent cricketer and a very good one – a spin bowler – he played most weekends in the summer and, now and then, if his club were playing somewhere near, I went to watch him. I didn’t really understand the game. It was a bit too complicated for me. But I loved to watch those long legs pounding up the crease and enjoyed the roar of delight – no correct that – the polite but appreciative applause that rippled round the ground when he took a wicket.

The day of the howler was a summer Saturday when the team played in Sutton where we lived. I put my first baby in his pram and wheeled him to the cricket ground where I sat on a deck chair in the sun to watch the game. I saw him take a wicket and acknowledge his applause and then I dropped off to sleep in the sun. When the game was over and he appeared beside us ready to walk us home, he was grinning like a Cheshire cat.

He was still grinning ‘I got a hat-trick!’ he said.

I knew what that was, three wickets with three consecutive balls, a vary rare achievement and I’d slept through it! How could I have done such an awful thing?! But I confessed. What else could I do? He put his arms around my shoulders and called my by his loving nickname for me ‘Oh woolly-bear!’ That was forgiveness of a very high order. He was very easy to love.

Over the years I learnt a lot from him. As our kids were born, I saw how well he handled their three very different personalities and very different needs. It was a skilled technique and he called it ‘Kidology’. We didn’t hit any of our children, EVER. But he could handle them in virtually every situation and if they were behaving badly he simply said ‘ENOUGH!’ and the bad behaviour stopped. It was a sort of loving magic and I watched it work with amazement and a lot of admiration.

When they reached their teens, he was still showing the way, treating them as adults, almost as soon as they’d reached thirteen. ‘Enough’ was rarely heard in those days. 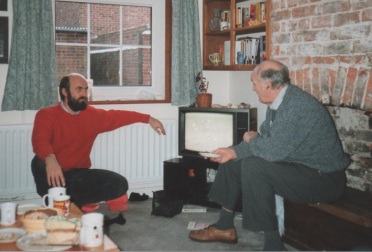 They evolved three new sorts of loving friendships, which I found absolutely delightful to watch because it showed how very fond they were of him and how much they trusted him.

Here he is talking to our son Larry as they very often did. I used it in a blog called ‘The Gentle Gentlemen’ because that’s what they were.

As we got older and when I was earning very good money, we went on lots of holidays together and lots of cruises. And in addition to that we took our grandchildren on holiday with us. Both these pictures were taken by Charlotte on two such holidays. They were very happy days. 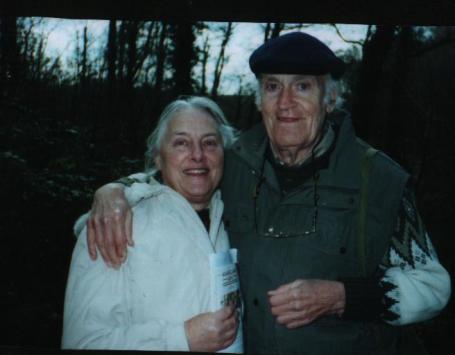 16 years ago, when he died, the entire family was devastated. I couldn’t even begin to think how I would manage without him. We all had to find new ways of coping – with grief, and with a new lifestyle. He’d been a very good man and his death ripped the heart out of us. I wrote this poem for him when he was 53, in an attempt to tell him what he meant to me.

Diurnal and reliable, you stay
Faithful as rain.
I drink again
Your dear love, used, but not diminishing.

My bruised thought open to you. What you say
Healing as sleep.
The watch you keep
Is soothing, love, before my dreams begin.

Necessary to me as light and day,
Constant as air.
Each hour I wear
Your unremitting love, just like my own known skin.