This has been quite a week! And for once in a while it’s turned up two splendid young men in the news. Splendid, handsome, young black men, the kind of men to admire. And for once in quite a long time I’ve got really good things to write about.

The first of these two men to hit the headlines is Patrick Hutchinson who attended the right wing demonstration in London last Saturday with a group of his friends, because they are all trained to cope with emergencies and they thought this demonstration might well turn violent and that then they could be useful, which it did and which they were. One of the demonstrators was knocked to the ground and injured and Patrick went into the melee and as he said ‘got underneath him and carried him off somewhere rather safer’.

When he was interviewed about it afterwards he said he hadn’t stopped to think, he just took action and later in the interview he said he was doing it for the future of his children and grandchildren. Respec’ Patrick! 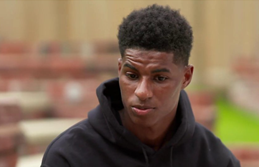 The second one of my lovely heroes, was this handsome, young man and in the normal course of events I wouldn’t have noticed him because he is a famous footballer and – shh don’t tell anybody – football leaves me cold! But this young footballer has warmed the cockles of my heart, because he is a great campaigner and has taken up the cudgels to protect our poorest children. The Prime Mendacitor had decided not to extend the government’s free school meals voucher system for low-income families over the summer holiday period. And our splendid 22 year old wrote to him to ask him to change his mind. He isn’t just handsome and a brilliant footballer, he has a good turn of phrase too. Just look at his plea!

“I encourage you to hear their pleas and find your humanity.”

“Without the kindness and generosity from the community there wouldn’t be the Marcus Rashford you see today: a 22-year-old black man lucky enough to make a career playing the game I love. Wembley Stadium could have been filled more than twice with children who have had to skip meals during lockdown due to their families not being able to access food.”

“This is not about politics; this is about humanity. Political affiliations aside, can we not all agree that no child should be going to bed hungry? Food poverty is a pandemic in England that could span generations if we don’t course correct now.”

The Prime Mendacitor, after spinning his usual web of lies all around the affair, gave way to the pressure and decided that he could find enough money to feed these kids after all. Respec’ Marcus! You’re a great guy.

And as if that weren’t reward enough for one week, I also discovered a new and rather scrumptious word. So I’ll leave you with that. It’s ‘quockerwodger’ and it’s first meaning is a wooden puppet but it’s acquired a secondary meaning too and that’s the bit I really enjoy. It is, and I quote, ‘a politician acting on the instructions of an influential third party rather then properly representing their constituents.’ Wiffle, waffle, piffle, paffle!

One thought on “I’ve got two new heroes!”