Although I’m told this little machine makes warning sounds if any of the leads come adrift. It hasn’t done it yet because I’ve only had it attached for 2 days but the wires and attachments seem to be everywhere. If I turn over in my sleep I end up lying on the thing and it wakes me up, because it is – to put it mildly – a lump. 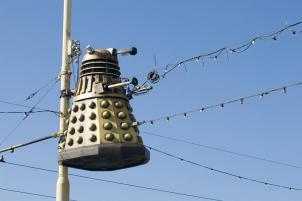 I feel like a robot and dare not look in the mirror! Exterminate! Exterminate! – No take that back. That’s not an appropriate word to use in our dark times I think, even though this particular dalek and I have a lot in common. Although to be fair they haven’t strung me up in the air on my wires.

I have to say I do prefer a nice, simple microphone. At least that gets detached when you’ve finished whatever interview you’re doing and being interviewed is fun.

Dixie has complained very loudly that there isn’t room for him and a machine on my lap, even though I try to shift it about so that it isn’t anywhere near his head. But Dixie is a cat of perfection and has told me very firmly that he will be jolly glad when the ‘lump’ has been removed. As I will!

At least this one doesn’t ping out a warning when one of its wires gets detached, as the machine in the hospital did. Actually, I didn’t mind that at all because it usually happened in the middle of the night and a nurse arrived to attach me again and we had a chance to talk to one another for a little while in the quiet. They were the kindest people alive, the nurses and doctors in that hospital and dealt with us all so tenderly and helpfully.  Respec’ to all of you. They were a very, very far cry from the nasty little two-bit spivs who are buying up all the toilet rolls, the handwash, the bread, eggs, sanitisers and pet food that we all need and storing it away to sell on at a profit. Shame on them. If I really were a dalek, I would certainly deal with them.

Time to close this particular blog and get back to my voluntary isolation. Oh frabjus joy! So I’m going to let a poet have the last word.

Louis MacNiece saw all this coming way back in 1938, and described it in his poem:

John MacDonald found a corpse, put it under the sofa,

Waited till it came to life and hit it with a poker,

Sold its eyes for souvenirs, sold its blood for whisky,

Kept its bones for dumb-bells to use when he was fifty.

2 thoughts on “I am wired, although not for sound!”