And as you can imagine, that takes some doing! His name is John White and he lives in Tooting and I’ve met him on Twitter and he’s a hundred years old.

Here he is celebrating his 100th birthday and talking to The Furzedown Project about growing up in London during the 1920s and 1930s. Images shared from @tootingnewsie on Twitter. 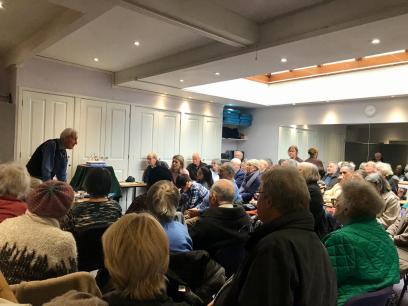 He joined the RAF in 1939 – which was three years before my old darling joined – and was a navigator, flying missions across the Mediterranean including the time when Malta was under siege. That talk must’ve been fascinating, I wish I could have been there to hear it, but with luck I might meet him when I go to Tooting in June to talk to the Furzedown Project myself. That would be fun! It isn’t often I can meet someone who can make me feel young. Usually when I meet new friends I’m very aware of how old I am.

There’s only one snag and that is that he will be a difficult act to follow. I shall be talking about growing up in Tooting in the 1930s and taking a look at the houses that I lived in and the schools I attended and probably taking a sideways look at what it was like to be in Tooting during the Blitz.

3 thoughts on “I’ve just met a man who makes me feel young!”