This blog is for people who have seen the latest film edition of ‘Little Women’ and loved it and would like to know more about its author.

I’ll bet a lot of you were like me and went straight back to read the book again. The copy I read when I was young has long since disappeared but I got Charlotte to put an e-book version on my iPad and I gobbled it up happily. At the end of the story there was a further piece of writing called a ‘biographical after word’. So I read that too and found it fascinating.

For a start I discovered that Louisa M Alcott was prolific and wrote best sellers. Little Women was published in September 1863 and was an immediate success. The first print run of 2,000 sold out very quickly and she was into a re-print before she knew where she was. By the time she wrote ‘Good Wives’ which was the sequel, it was given a print run of 13,000 and that sold out equally quickly.

The second thing that I found out was that she was the person who supported her family, not her father. The father in the book and the film was the great support of his family but in real life he couldn’t provide a steady income. His name was Amos Bronso

n Alcott and when she was two, he set up a ‘experimental school’ founded on the principal that children should enjoy themselves while learning at their own pace. Much maligned by critics of course, then as now! His school was so very heavily criticised that it failed and that meant that the family were very, very poor.

Later on he taught his own children using the same method and introduced them to his friends who numbered some very impressive, now famous, people one of them was Ralph Waldo Emerson – who was a lecturer, essayist, a poet and a teacher, Henry David Thoreau, – another essayist, poet and philosopher, Margaret Fuller – american journalist and publisher, who was an early advocate for womens and Nathaniel Hawthorne American novelist and a renowned short story writer. 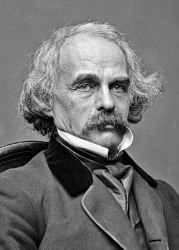 Unlike the father in both the novel and the film – he did not go to war, but Louisa did and she was horrified by what she saw there. Her biographer says she got a position on the front line and joined the medical service where she changed bloody dressings and assisted in amputations.

The Alcotts were passionately on the side of the slaves and wanted to see slavery abolished. Their home was part of the ‘underground railway’ which helped escaping slaves to leave the south and get to the north.

When the war was over Louisa wrote three anti-slavery short stories and went on to write  ‘Gothic novels’. She made quite a lot of money from them, which was just as well, as she had a family to support, but she didn’t put her name on  any of them.

Her sister Lizzy died of Scarlet Fever just as Beth in the story does and she herself caught typhoid fever during the war and was dosed with mercurous chloride, which probably gave her mercury poisoning later in her life.

In many ways Louisa was very much like Jo in the book and the film, she wrote that she was old for her age and didn’t care much for girlish things. ‘People think I’m wild and queer but my mother supports and helps me.’ But unlike Jo, she never married.

It’s a fascinating story and made me like her more than ever, especially when I discovered that she was one of the early American Suffragettes and was one of first women who registered to vote, when she voted in a school board election in Concord, Massachusetts.

One thought on “What was the author of ‘Little Women’ really like?”