Agora are re-publishing yet another book from my back-list today. This one is slightly different from all the others, because it’s the first book in a trilogy, which is called ‘The Easter Empire Trilogy’ because it is about the foundation of a great book selling empire like WHSmiths and was in fact based on the book about the WHSmith family, which the company very kindly sent me to help me with it. I must confess I was not truthful to the original. For although the founder of Smiths like my heroine, started the newspaper empire after her husband died and left her penniless, by selling the ‘tuppenny times’ on the streets for two pennies and a farthing, she was exhausted by her endeavours and died relatively young, leaving the burgeoning empire to be run by her children.

But I was writing fiction and got fond of my heroine, so I followed her adventures in two more books: ‘Fourpenny Flyer’ which was based on the years when the newspapers were dispatched all over the country by train and were taken to the station in carriages called ‘flyers’ which cost fourpence a time and ‘Sixpenny Stalls’ when the company set up stalls in railway stations which sold popular books at sixpence each. As one of my reviewers said when the third book of the trilogy originally came out, ‘she’s inflationary, but she’s worth it.’ That tickled me pink!

I hope new readers will be as entertained by my heroine Nan Easter and like her as much as I did.

You can purchase a copy of Tuppenny Times here. 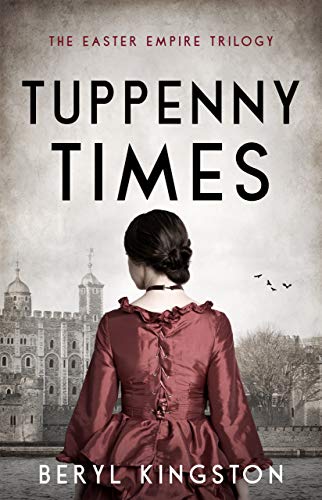