They’re running a promotion between Thursday January 30th and Thursday February 6th for all the e-book versions of my titles that they publish. They will be on offer for just £1.99 ($2.99 in the US) with the exception of Two Silver Crosses which is only £0.99 ($0.99 in the US).

As there’s such a rush of titles I thought it might be rather fun to tell you the story of how one of the titles ‘Two Silver Crosses’ came about. I can’t always remember the sparks of all the books but this one was rather particular.

One balmy summer day, my old darling and I went to visit Uppark House in Sussex. We enjoyed our tour of the building very much, but it was the butler’s pantry that gave me the story. It was all set out exactly as it would have been when there was a butler waiting on the family and one of the unexpected things in it was an ironing board which the butler used to iron the masters morning paper, because as it was explained to us, ‘it would never have done for the master to find creases in his paper.’

I looked at the paper with considerable interest and found it was a copy of The Times and that it was the top page that was being ironed. No headlines or news, that wasn’t the style in those days. Instead it was full of advertisements for all manner of things and one of them caught my eye and fired my imagination.

“‘Holborn,’ it read, ‘for the attention of twin sisters Virginia and Emily Holborn , late of “High Holborn” near Wolverhampton, last seen ten years ago, in July 1926, at Victoria Station, London, boarding the boat train to Boulogne, each wearing about her neck a silver cross. Should the above mentioned care to contact Messrs Hedgethorn and Crabbit, solicitors, of Little Medlar Yard, London WC1, they would hear something to their advantage.’ “

There was so much in it that needed explanation. Why were they going to France? And where had they been for those ‘last ten years’? What was the significance of those silver crosses they were wearing? What was it they would hear to their advantage? The questions became ‘Two Silver Crosses’. Which was first published in 1993 by Century, Random House and was reprinted by Agora Books in March last year. 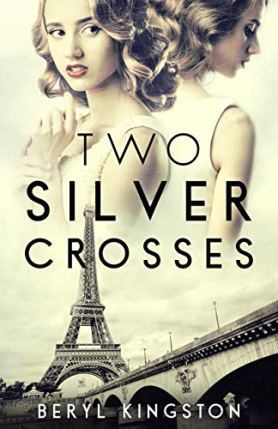