37 years ago I started to write my very first novel. I was 51 years old and not at all sure that I would be able to do it or that anything would come of it when I had but I went ahead with it anyway.

Because I knew that most new writers are tempted to write about their own lives, I made up my mind that I wouldn’t give anyone the chance to say that’s what this novel was about. So I chose a young man as my central figure and started the story in the 1890s but then of course I started to cheat.

The place that I new better than any other was Tooting and so that is the place that I used as the main setting of my story. I also knew what an immigrant to London in the 1890s would have had to contend with. 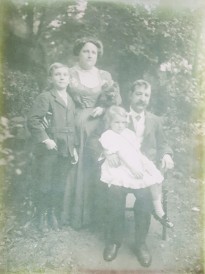 My maternal grandfather was called Albert Parodi and kept an off-license at the corner of Mitcham Road and Church Lane. Here he is sitting in the garden of his house in Longley Road with my mother on his lap. I never knew him because he died when my mother was 19, but I heard sufficient about him and the life they all led at Longley Road to feed my imagination.

And here is a picture of the shop with his name on the shop blind. 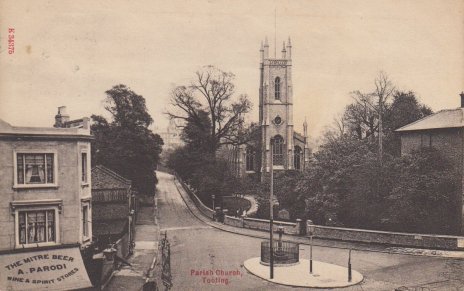 I lived in the flat above that shop while buzz-bombs and rockets were falling on us during the war. So what with Longley Road and Church Lane, I was steeped in local history, which I found fascinating. For example, the funny little object on the island in the middle of the road with the railings round it was one of the two artesian wells in Tooting, long before the coming of running water. The other was in the slum area known as the Salvador which was demolished to make way for the great Granada cinema.

It took me a long time to write that book because I was teaching then and had to squash the writing into whatever time was left around the edges of what I was doing in the classroom. But it was finished at last and to my total amazement and incredulity it was taken by an agent and published by Century-Futura in 1985 and became a best-seller pretty well overnight. No I didn’t believe it either!

And now the wheel has come full circle and this Thursday as ever is, my present publisher Agora are re-issuing this old warrior as an eBook and paperback. Welcome back old friend!

You can find it on Amazon here. It’s available now as a paperback and the eBook will come out too on Thursday.