If you have tears, prepare to shed them now. Dixie is extremely annoyed and wants you to know that he does not approve of painters and decorators. They’re alright in their way but not when they get in his way.

Over the last three weeks I’ve had my grandson-in-law in the house painting the bedrooms and very beautiful they look now that it’s all finished. But Dixie does not approve, because one of the first rooms to be painted was ‘our’ bedroom, which meant, shock horror, that he had to sleep with me, in a completely different bed, in a completely different room. He was not pleased and told our painter how displeased he was, fluffing his long coat up to make himself look as fat and threatening as he could and shouting at him very loudly so that there was no mistake at all about his displeasure. Tom tried to explain and held out a placatory hand, but once a cat has taken umbrage he can and does ignore all peace overtures. 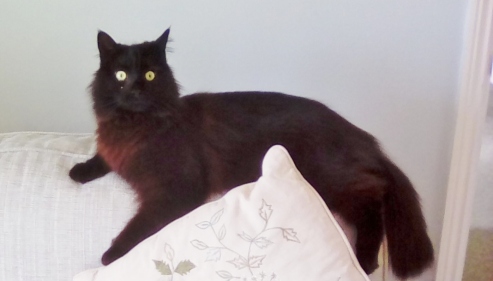 Since then, as you can see he has kept a very close feline eye on all activities in every part of the house. None of us have been left under any pretense, that in this house cats rule.

Yesterday evening to his total satisfaction we returned to our original and proper sleeping quarters. It took him a little while to settle in because he had to run all over the duvet cover and the pillow cases with his muddy paws to establish ownership. But he did settle eventually – on my head – as usual, where he spent the first twenty minutes of the night tread-milling my hair.

And now that everything has been restored to order, he can graciously condescend to wish you all a Merry Christmas and a Happy New Year, as I do.