It’s that time of year again when school children receive their exam results and politicians make speeches about maintaining ‘standards’. So let’s consider what we mean when we use the word ‘standard’. A lot of people are convinced that if a child has achieved a grade A or 9 or whatever it is they are calling it now, the level he or she has achieved will be the same as it was last year or the year before or even ten years ago. But it ain’t necessarily so.

Stand well clear, I’m going to bombard you with facts and statistics, but I’ll make them as painless as possible, for like everything else political, standards have been developed to fit certain situations.

Let me start with the 11+, which some of you will remember and will have taken. The standards set in every part of the country depended entirely on how many grammar school places there were in the area. In Sussex for example, 11% of the child population could be given a place in a grammar school. In South Wales it was 25%. In London it was 20% but the mark achieved by boys was lower than that required from girls because there were almost twice as many grammar schools for boys in London as there were for girls. The examin 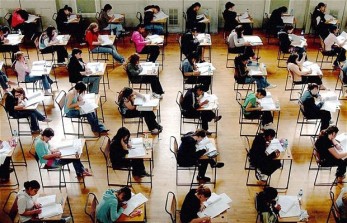 ers had an easy task, the 11+ examinations came in three parts, English, Maths and Verbal Reasoning. All that was required was to add up the total of all three marks, type them out in rank order and count down the column until you had reached the number you could accommodate in your local schools. Simples as the meerkat would say.

Those of us who taught in London primary schools like my old darling, knew perfectly well that a lot of girls were ‘failed’ who were much more intelligent then some of the boys who passed. It was an unfair system and we brought in Comprehensive schools in an attempt to solve it and to give all our children a chance to succeed whenever they were ready for it.

When it came to O-Levels and A-Levels, which were then called ‘Lower school and Higher school certificates’, quite a lot of people – even some teachers – described them as being necessary to ‘sort out the sheep from the goats’. There was a time when you would not be allowed to take Higher schools unless you had ‘matriculated’ in Lower schools, which meant achieving a good pass in five key subjects, English, Maths, a Humanities, a foreign language and Science. And why was that? Well because there were simply not enough University places in the lesser universities to cater for more pupils – and by lesser universities they meant universities other than Oxford and Cambridge – to which we lesser mortals couldn’t possibly aspire.

There were a good many sociologists around in those days who spoke boldly about the fact that our education system was a means of social control. I think they were entirely right and anyone who studies Margaret Thatchers actions in the educational sphere, will surely see it. She spoke loudly to her potential electors about how she and her government would improve standards so well that over half the pupils in an academic year would be capable of going to university. It was the simplest thing in the world for her to achieve. All she had to do was to shift the boundaries between the grades, so that grades that had been A and B became A’s, C’s and some D’s became B’s, the rest of the D’s and E’s became C’s. I was teaching then and got the picture quite simply by comparing the results we had predicted with the results that were awarded.  I heard a whole chorus of meerkats saying ‘Simples’ that time.

As Mrs May would say, ‘A standard is a standard.’ Yeah, yeah!