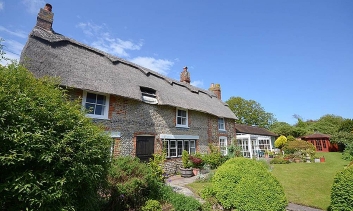 I’ve got an ugly story to tell you this morning. But first, take a look at these two pictures. The first is the one we all know very well. It’s the cottage where Blake lived from 1800-1803. The second one is a picture of the house in which he had rooms from 1803 to 1820. There are two things about these properties that are very significant now.

For a start they are the only two properties in which Blake lived, which are still standing. All the others have been demolished. But there is another link between them that is something we all need to know and something which could well be illegal.

To begin at the beginning. I had coffee with Peter Johns (the local member of the triumvirate who lives in Lavant) on Sunday. I wanted to see if our 500 strong and growing petition had influenced the triumvirate’s thinking at all. And I’m sorry to report to you that it had not.

Of course he agreed that the cottage needed repair. Of course, of course. But the triumvirate’s top priority is to raise the £50,000 to pay Tim Heath’s chosen architectural company for drawings and plans.

All the old hoary excuses and reasons were wheeled out. If they had the drawings they could show them to wealthy donors who would come across with the money. It’s a pretty dream but that’s all it is. They are going to pay for a obscenely expensive “sprat” to catch a “mackerel” that could well prove elusive and give them nothing at all. He told me over and over again, that this money could be raised if I was to TELL all my blog readers and all the people who signed that petition to part with their cash. ‘Just TELL them,’ he said. ‘You are the one who has a way with words.’ So although I had no intention at all of TELLING anybody to do anything – that’s not my style – I promised him to write another blog. Whether or not you think it right to hand over your money or not is entirely up to you. I wouldn’t touch this project with a barge pole, not now I know what I know.

We continued to talk and I told him that Tim Heath had lived in the family house all his life and was about to be turfed out of it because it would be on the market.

‘Would this,’ I asked him, ‘have anything to do with the fact that the half a million pound building he wants to build in Blake’s garden, has now become a residence? Who is going to live there?’

The answer, revealed more than I think he realised.

Oh no, Tim was not going to live in Blake’s Cottage, he could assure me about that. It was Tim’s dream to purchase Blake’s part of the property at 17 Molton Street and if the cottage could be repaired and/or the second residence built, it could earn sufficient money for Tim’s dream to be realised. I remembered then that right at the start he had declared that he wanted to ‘join the two houses in a single creative project’. I thought that was idealistic pie in the sky, rather on a par with the scores of geniuses he dreams of producing over the next thousand years by allowing wannabe artists into the cottage. But no, there is a deeper and darker reason. He wants to be the man who owns both Blake’s surviving houses and it looks very likely to me that he will use the cottage to earn the money to buy the house. Or to put it another way, the cottage will be a milch cow to be used to finance his dream.

We need to know now whether a trust that owns a property has the right to milk it to earn money to buy another property. The charities commission could possibly advise.

This Friday the Blake Society holds its annual general meeting in Waterstones in Piccadilly. And most of the unpaid trustees will attend. I shall alert as many of them as I can to read this blog before the meeting. These are things that they should know and if they are true trustees, should act upon.

2 thoughts on “An ugly story”