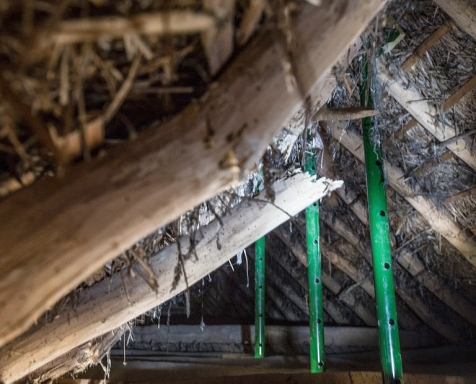 It’s taken a very long time and a lot of badgering to get this picture to put on my blog. It was taken by Roger Crocombe who is now the chairman of the Bognor Camera Club and has been ‘commissioned’ (although not, please note, paid) by the triumvirate of the Blake Cottage Trust, to take pictures of the inside of the cottage to show the progress of its ‘regeneration’ .

This is the latest photograph of it’s regeneration. I think they’ve got the wrong word. The one you need gentlemen is de-generation.

When the BCT reported the commissioning of a photographer on their website, I got in touch with Mr Crocombe and asked if I could see the photographs. He allowed it, even coming round to my house to show them to me. But when I asked him if I could have copies of them to put up on this blog he recoiled in horror and said he couldn’t do it because Mr Johns (one of the triumvirate) had instructed him to pass all requests for photographs over to him. Later, when I had arranged this Saturday’s meeting in the memorial hall in Felpham and booked the hall and ordered up a set of posters, I asked Mr Crocombe again and again I was refused. Someone with a suspicious mind might well conclude from this that Mr Crocombe and the triumvirate do not want these pictures to be seen.

And now bless me, Tim Heath the chairman of the BCT has actually put a photograph up on the BCT website, so it is in the public domain and here it is and you can all see it. Incidentally, the one thing he didn’t confess to on these two latest blogs is the fact that the Blake Cottage Trust DO NOT HAVE ANY MONEY. Their finances haven’t grown in any way since they bought the cottage and were left with a mere £1,462 in the bank.

I daresay a lot of you reading this will be alarmed and appalled by that picture. If you are will you pass news of this blog on to as many friends as you can, and, if you live in the Felpham area, will you join me at the meeting. 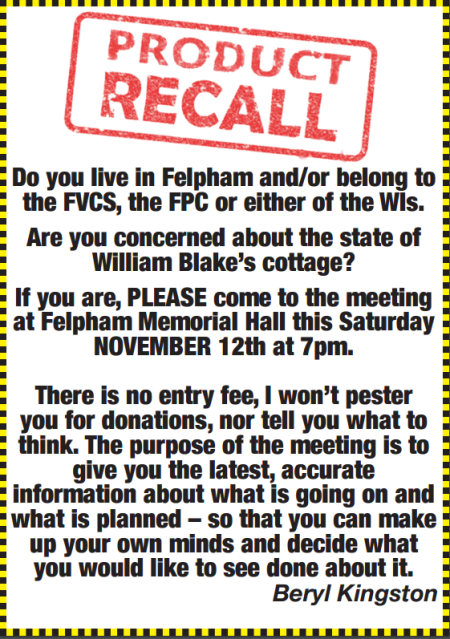