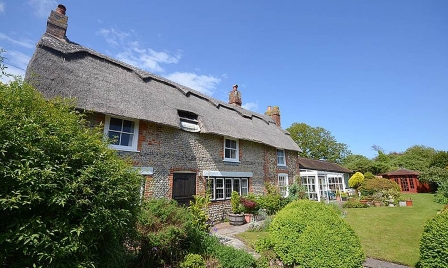 Yesterday I went to Blake’s cottage having been told that the Blake Cottage Trust (BCT) had hired a firm to erect steel supports there to stop the roof falling down. For the first time in months the gate was open, so I walked in. And sure enough, workmen were there, already putting the supports in place, and who should I find standing among them but Peter Johns, one of the triumvirate. I congratulated him for getting this work underway at last and asked him when the repairs were going to begin. After hesitating a little, he told me that the repairs cannot start because the BCT haven’t any money. I have to say I admire his courage in admitting to the truth like that at last and asked him to write it all down for me and send it to me via the blog which he did, and this is what he said. I’m quoting verbatim:

“At long last we have been able to raise just enough money to put in the steel supports to save the roof and stabilize the walls. I hope to have some photos of the work on our website (www. Blakecottage.org) by Wednesday. But as you say this is only just the beginning. We urgently need donations…”

Sadly, I find it hard to believe that they will be able to raise the sort of money they need. I hope you’ll forgive me if I quote a few figures at you but it will show you why I believe as I do.

Take that fortuitous donation from the total and you will see that only £95,000 of the price was raised from donations and a very large part of that came from the monies raised in Felpham by The Big Blake Project. Or to put that another way Tim Heath and the Blake Society actually raised very little of the money needed. And yet he is still talking as though raising money was going to be possible. It never has been and it certainly isn’t now. It will take them many years to even begin to gather all the money they need and by then the cottage will be in such a bad state of repair that it could well be demolished.

Now take a look at this extract from the BCT’s Annual report and accounts for 2015, which I have just seen. Their financial situation is even worse than I thought, in addition to everything else they now have a considerable loan to be re-payed.

With considerable assistance from the Blake Society the trust succeeded in raising £479,419 which together with a loan of £19,250 was enough to purchase Blake’s Cottage and put it into trust for the nation. At the year end the Trust had cash in hand of £1,462. Fund raising activities are continuing in earnest to fund the restoration of the cottage, and to create a visitor/research/educational centre on the site.

So please, please, please continue to sign our petition and urge as many others to sign it as you can. We need to make it quite clear both to the BCT and the world at large that we want our Blake’s Cottage repaired and preserved. It is too important to be left to rot.

You can do it via this link:

or if you live in the village, anywhere where you see this poster.

We are already hundreds strong and growing but we need to be
in our thousands to really have an impact.

Now even at the risk of boring you to tears I have a further quotation from Peter Johns comment on my blog site that I think you ought to see. He tells me they still intend to employ and architect to draw up plans for this new half a million pound building that they want to erect in the grounds. They were originally intending to pay an architect £50,000 as I’ve told you in other blogs. Now he says: “The architect has agreed to do the work at cost but even so we will need nearly £30,000 just for that without counting the ongoing maintenance, insurance etc.”

He doesn’t mention the new building but seems to imply that these costly plans are for the restoration of the cottage and will have a special use. “We can than submit to the big charities (HLF, Sainsbury’s etc). Only once we have this plan will the charities take us seriously.”

All this seems rather odd to me but that is what he said.

Meantime our petition is motoring and I shall continue with it until the triumvirate make a public statement that they cannot afford to repair the cottage – as they will have to do sooner or later. We cannot let them just drift on and on for years and years, hoping like three Mr Micawbers that something will turn up. They must keep us informed, admit in public that they cannot afford the repairs and let us know when they are finally handing the cottage over to one or the other of the two big organisations who can afford to repair it and will know how to handle it.

I shall keep you all informed as to what is going on on my blog at regular intervals.