Take a look at this picture. It’s a summertime shot of the cottage where Blake lived between 1800 and 1803 and it still stands in Felpham in West Sussex, right in the heart of the village. When this shot was taken, t

he cottage was owned and lived in by a lovely, friendly lady called Heather Howell. She welcomed visitors, saying she considered herself more the guardian of the cottage than its owner, and as I quickly discovered, she is a very considerable Blake scholar, one of the very few people I’ve met who has read Blake’s entire oeuvre and understood it. I grew very fond of her, very quickly. 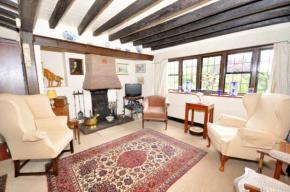 The cottage has changed a lot over the years, this is how Blake’s living room looked when Heather was living in it.

This is Blake’s tiny drawing of it as it was when he lived there, with a single storey lean to of some kind to one side of it, a pump in the garden and an angel floating over the roof. 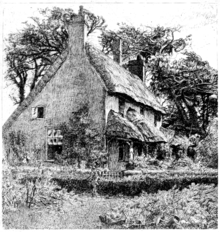 By the 19th Century it had acquired a two-storey extension and thatching over the windows and the front door. There’s no road alongside it and it still looked out over farm land.

By the turn of the 20th Century it had become famous enough to merit a postcard and by that time there was a single storey building extending all along the front of the house. 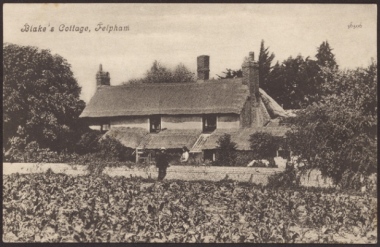 Lots of changes as you can see but it’s a tough old house and it’s weathered them all. Until now when it’s facing the most profound change of all. And that’s what I’m going to tell you about in this blog. But first I must bore you a bit -not too much I hope – by giving you a potted history of the most recent events.

In September 2013, when Mrs Howell was no longer well enough to live there and look after herself, the cottage was put on the market. A fund was set up by the Blake Society in London to raise the money to buy it ‘for the nation’.

Thirteen months after this, on 30th October 2014, a new company was set up by Broadway Directors Ltd in London and one Mr Simon Weil who described himself as the director. Nobody in the Blake Society was told about it and nor was anyone else. So you might well be asking, What has this got to do with Blake’s cottage? Bear with me. It had and has a very great deal to do with it.

At the local level, Felpham’s Big Blake Project, to which I belong and which is run by a local teacher and Blake addict called Rachel Searle, raised funds for the cottage in every imaginable and imaginative way and persuaded West Sussex Council to give a £10,000 grant towards it. But there was still a shortfall and, as time went by, we began to lose heart and to fear that we would never be able to raise the full asking price. But then, out of the blue, a mystery donor appeared who put up the necessary £400,000 and on September 21st 2015 the house was bought for £495,000. But not by the Blake Society, which had been gathering and banking the many donations. No. Remember that secret company set up a year before by Broadway Directors Limited? Well,  lo and behold, that had become a new company called the Blake Cottage Trust and they were the ones who paid over the money, which had been handed to them by the Blake Society, and they were the ones who became the new owners of the cottage.

The Blake Cottage Trust has three members, Tim Heath, the Chairman of the Blake Society, pictured here, Peter Johns, a business and management consultant who lives in Lavant (coincidentally in the very house where Blake and his patron William Haley used to take breakfast with a redoubtable lady called Miss Poole) and Dr Michael Phillips, a Blake scholar and academic who lives in Edinburgh and has discovered how Blake’s printing press was made and used, and has had a replica of it built.

Now and at last, we thought In Felpham, and just in good time to start work on the restoration of the cottage before the winter storms begin.

We were wrong. Nine months passed and absolutely nothing was done. Except that on 23rd September 2015 Tim Heath told the Daily Telegraph what his plans for the cottage were.

One idea is to let it out to people who would love to stay in Blake’s cottage, to sleep in Blake’s bed… People who would pay a premium and that would subsidise others like artists and musicians looking for respite and refuge. And finally the cottage would have an element of public access.  ‘AN ELEMENT’ you’ll notice. Bit of a disappointment that. We’d expected him to say that it would be open to the public, which is what we’d been working for.

So we waited and time passed and still nothing was done. And then an invitation was sent out to all members of the Blake Society through their Newsletter. It was vaguely worded but seemed to indicate that there might be some movement at last. ‘You are invited to look round the cottage and talk over tea about the challenges yet to be faced and, with your help, surmounted.’

So Rachel and I went.

It was really quite alarming to see how badly the cottage had degenerated since it was ‘bought for the nation’ in September last year. Some of the roof timbers are so rotten they have broken in two and the thatch is protruding through the now bulging ceiling. But I walked around the cottage and the garden, discovered that most of the people there were members of the Blake Society and that there were only three of us there from Felpham and listened and made notes.

I needn’t have bothered taking notes because yesterday there was an article about the cottage and the plans that the Blake Cottage Trust has for it in our local paper. It is very outspoken and begs a lot of questions.

The plan, Peter Johns said, is to restore as much of the original building as we can so that it’s as close to what it was when Blake lived there.  The Trust hopes to have permission to carry out urgent repair work to the roof within days.

We will keep the main cottage and the Victorian part but the modern extension is an EYESORE and coupled with the garage has made
quite a large FOOTPRINT (what a curious word to use). We want to use that footprint to create a building which would act as a study, library and meeting place. Since buying the cottage last year work has been going on BEHIND THE SCENES for the hugely significant property.

Reading this you might think that the ‘hugely significant property is Blake’s cottage. But no. He is talking about a new building that will cost half a million pounds and which  they will build in the garden of Blake’s cottage when they’ve pulled down the footprint. Read on.

Around £50,000 will be spent on producing architectural plans and drawings to show to potential sponsors to attract the half a million in grants they need for the main project.

6 thoughts on “What is happening to Blake’s cottage?”